Raw Diets: A Healthy Choice or a Raw Deal? 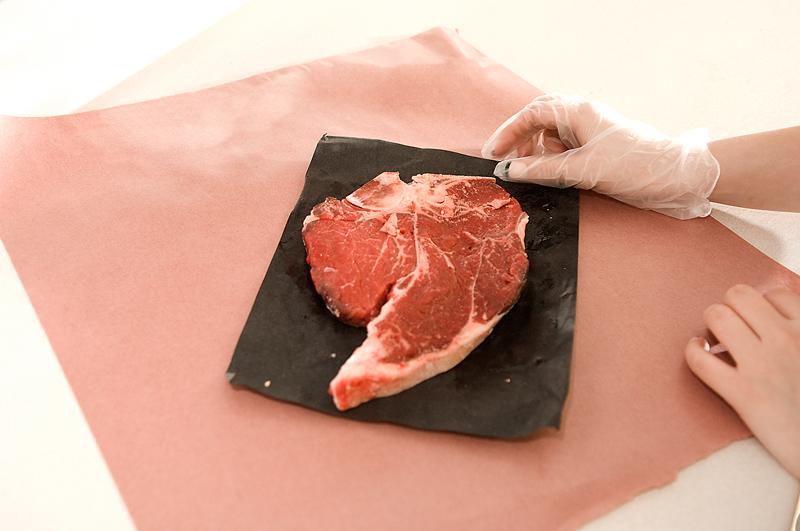 in All About Pet Food, Trending Topics in Pet Nutrition

Raw meat-based diets, both commercial and home-made are increasing in popularity. You likely know a friend or colleague who is feeding this type of diet to their pets and you may have heard lots of wonderful things about what these diets can do. But how much of the glowing testimonials that you’ve heard are accurate, and is there any risk to this type of feeding strategy?

What is a Raw Meat Diet?

Raw meat diets generally consist of various muscle meats, organ meats, and sometimes fruits and vegetables. Some diets contain whole bones or ground bone while others do not. They can be homemade from various recipes (e.g., BARF or Ultimate Diet) and are also available commercially from a variety of companies. Commercial raw diets are typically frozen or freeze-dried but some can even look like regular dry food (e.g., diets with a raw meat coating or kibble mixed with freeze-dried raw chunks). No matter whether they are homemade or commercial, they all have similar concerns.

Proponents of raw meat diets anecdotally report numerous benefits, but there is no scientific information showing any health benefits from raw meat diets. Some studies have shown a small increase in digestibility from raw diets compared to commercial dry diets. However, this may be the result of the ingredients, rather than the fact the diet was raw (the studies did not compare the raw diet to an identical diet that was cooked). The effects of this small difference in digestibility warrant additional research but do not appear to provide sufficient evidence to outweigh the potential risks for raw meat diets. There are an increasing number of studies that show important concerns for nutritional imbalances and health risks to the animal, as well as serious public health concerns. Bottom line, there is no proof to confirm any health benefits beyond a few stories. We do, however, have proof that there are risks, so until there is evidence of clear, important health benefits to cancel out those risks, we can’t recommend raw meat diets.

A small study from the United States in 2001 demonstrated multiple nutritional imbalances, some of which could have important health effects for the animal. A European study calculated levels of 12 nutrients (e.g., calcium, phosphorus, vitamin A) for 95 homemade raw meat diets being fed to dogs and found that 60% of the diets had major nutritional imbalances. In our clinical practice, we’ve seen a number of commercial raw meat diets whose nutrient profiles either don’t make any sense, or don’t meet current nutritional requirements, despite labeling to the contrary. We’ve also seen a number of commercial raw diets that are marketed as being appropriate to feed as the main diet when they are deficient in multiple essential nutrients. Therefore, there is concern that both commercial and homemade raw meat diets may have important nutrient deficiencies and excesses. In addition, even if these diets meet the minimum nutrient levels and don’t exceed the maximums, they may not provide an optimal nutrient profile. For example, many raw meat diets may be very high in fat compared to typical canned and dry diets, which may make the coat look shiny, but could cause health problems for some animals.

In addition to the many health problems that can develop as the result of deficient or excessive intake of nutrients (e.g., calcium: phosphorus imbalances), other risks of raw meat diets include gastroenteritis (inflammation of the gastrointestinal tract, usually resulting in vomiting and diarrhea) which could be due to bacteria in the diet or high dietary fat levels. For raw meat diets containing bones, gastrointestinal injury or fractured teeth can occur. We’ve also seen constipation due to lack of fiber, or large amounts of undigested bone filling the colon.

Because of the high potential for contamination with pathogenic bacteria (see below), bacterial infection can occur. This can result in gastrointestinal disease, blood infections, and even death. Another negative health effect of raw meat diets and treats identified in dogs is hyperthyroidism.

Finally, raw meat diets can alter commonly measured blood values, such as blood urea nitrogen, creatinine, hematocrit, albumin, and cholesterol. While it is unclear whether these findings have any long-term health implications for the animal, it is important that your veterinarian know if you feed these types of diets or treats to your pet to be able to accurately interpret the results of laboratory tests.

Raw Meat Diets have a High Risk of Contamination

Recent scientific studies have shown that a large percentage of raw meat diets (whether commercial or homemade) are contaminated with bacteria. Some of these bacteria are unlikely to have negative effects on health, but others can have serious consequences. For example, studies have found that up to 48% of commercial raw meat diets are contaminated with Salmonella. Other bacteria that have been found in raw meat diets include E. coli 0157:H7, Listeria, and Clostridium. There were 20 recalls for bacterial contamination of raw meat diets and treats in 2015, while there was only 1 during the same time period for a dry cooked diet.

While pets can get sick from eating raw meat diets, these diets can also pose a risk to the human family. Animals eating raw meat diets can shed these bacteria in their feces which can cause people to get infected. Even simple things like your pet licking your face could turn into a major health problem if your pet eats a raw diet.  This is particularly true for any people or animals who are young, old, pregnant or immunosuppressed. It’s also reasonably likely that if you do get sick from the bacteria in your pet’s raw diet that the bacteria will have some degree of antibiotic resistance. A study from Canada found that the bacteria isolated from commercial raw meat diets showed resistance to 75 percent of the antibiotics tested. Though some companies will tell you otherwise, pet cats and dogs are not immune to these bacteria and we have seen patients who got sick from these bacteria (which can sometimes even be deadly if the infection spreads throughout the body!).

A few of the most common myths about raw meat diets are listed below:

MYTH 1: “Their benefits are proven.”
TRUTH: No scientific studies have shown benefits of raw diets. Their appeal is based on word of mouth, testimonials and perceived benefits. For example, raw food diets may result in a shiny coat and small stools because they are generally high in fat and digestibility. However, these same properties can be achieved with commercial cooked diets without the risks of raw meat diets.
MYTH 2: “This is what animals eat in the wild.”
TRUTH: Wolves in the wild do eat raw meat (in addition to berries, plants, etc). However, the average lifespan for a wolf in the wild is only a few years. Therefore, what is nu- tritionally “optimal” for a wolf is not optimal for our pets that we hope will live long and healthy lives.
MYTH 3: “Dogs and cats can’t get infections from Salmonella or other bacteria in raw meat diets.”
TRUTH: Dogs and cats can become infected with Salmonella, Clostridium, Listeria and other bacteria found in raw meat diets, just as people can (especially young, old or immunosuppressed individuals).
MYTH 4: “Freezing or freeze-drying raw diets kills bacteria.”
TRUTH: Most of the bacteria found in raw meat diets can survive freezing (and freeze-drying).
MYTH 5: “As long as bones are raw, they’re safe.”
TRUTH:Bones, whether raw or cooked, can fracture dogs’ and cats’ teeth. Bone also can block or tear the esophagus, stomach or intestine.
MYTH 6: “Cooking destroys enzymes needed for digestion.”
TRUTH: All the enzymes that dogs and cats (and people) need for digestion are already in the gastrointestinal tract. Therefore, additional enzymes from food are not required for digestion.
MYTH 7: “If bones or chicken necks are added to raw meat diets, they’re nutritionally balanced.”
TRUTH: Most homemade (and even some commercial) raw meat diets are extremely deficient in variety of nutrients  This is usually true even if chicken necks, bones or egg shells are added. Deficiencies of calcium and other nutrients can be disastrous in any animal but especially in young, growing pets and can result in fractured bones. In addition to the nutritional imbalances of these diets, raw meat products are likely to carry bacteria (like any raw meat products we encounter at home or in restaurants). These diets pose a health risk, not only to the individual animal eating them, but also to other animals and people in the household.

References for this information are included in a recent article written by Dr. Freeman and other nutritionists.  For further reading on this topic and a full list of references, please see:

What’s the Best Food for your New Puppy?

To Chelate or Not to Chelate [Minerals]?