Vegan Dogs – A healthy lifestyle or going against nature? 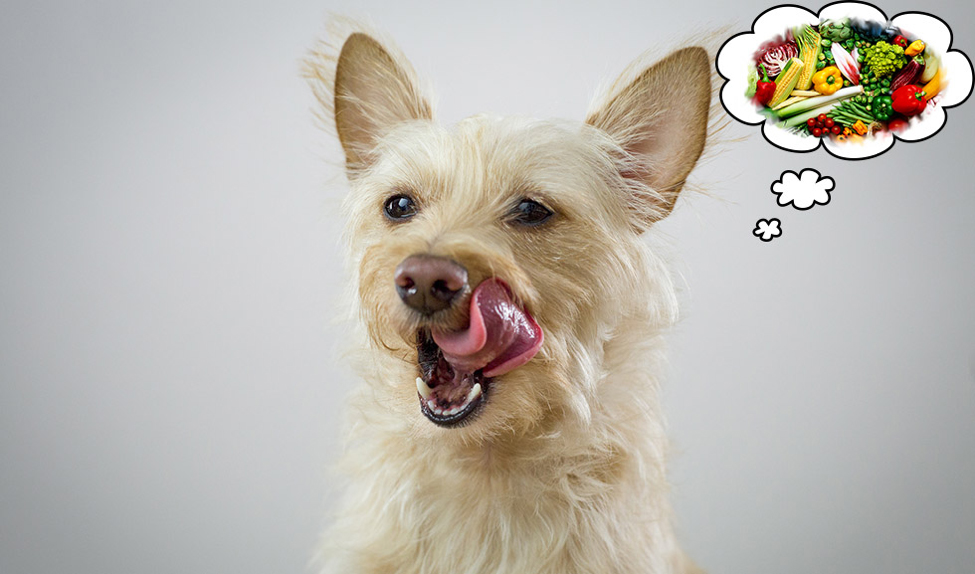 Recently a story has been circulated around social media about a dog owner who posted a picture on Tumblr showing how “excited” her dog was to eat her home-made gourmet *vegan* meal. The story has been shared tens of thousands of times with thousands of comments added from those who supported or more commonly criticized the owner for feeding an inappropriate diet.

The comments in the anti-vegan dog camp included a number of assertions that dog biology is not compatible with a vegan diet while others argued that dogs can live healthy lives without any animal-derived ingredients. While vegan diets (or home-prepared diets in general) can cause numerous health issues if not designed by someone with considerable dog nutrition expertise, many of the arguments used against this owner are half-truths or myths.

Let’s take a look at some of the comments from those who attacked the owner for feeding a vegan diet (based on the article above) and do some fact-checking:

The pancreas’ job, among other things, is to produce the digestive enzymes that dogs need to digest their food. Most dogs’ pancreases work very well at this task and dogs do a very good job breaking down starch from plants. The digestibility of most plants that are a common part of human diets is quite high in dogs, not all that different from what it is in people. There is no evidence that feeding a higher carbohydrate diet damages the pancreas in any way.

The second assertion in this comment, that a carnivore’s pancreas does not secrete the enzyme cellulase to break down cellulose (a type of fiber found in the cell wall of plants), is misleading for two reasons – the first is that dogs are more omnivores than carnivores (more on this below) and the second issue is that NO mammals – carnivore, herbivore, or omnivore – make the enzyme cellulase. This is why people and dogs can’t digest plants high in cellulose like hay. Fruits and veggies and grains do not have high enough amounts of cellulose to cause issues with digestion for dogs.

Animals that do eat foods like leaves and hay, such as horses, goats, cows, and the giant panda, have bacteria and other microscopic creatures in their intestines that do have the enzyme and these tiny little “friends” are the ones that actually break down the cellulose in their diet, freeing up nutrients for the animal.

Let’s look at one of the other arguments: 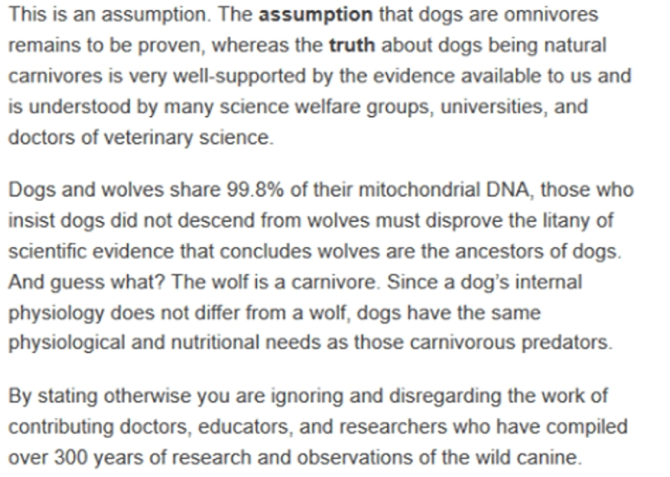 Well, I’m both part of a university and I have a veterinary degree (as well as a Master’s degree in nutrition), and here’s what I understand to be the truth:

To put the info above in perspective, humans share about 96-99% of their DNA with chimpanzees (whole genome, not just mitochondrial DNA). Yes, dogs definitely descended from wolves, but that doesn’t mean that a wolf and a dog have the same nutritional needs, so using numbers like this to justify a certain type of diet is misleading – an incorrect assumption on the part of the comment author.

This argument is also “ignoring and disregarding” some very important scientific evidence that goes against the point being made. In 2013, a group of researchers compared the dog genome (all the genes in the DNA) to the wolf and found that the differences between the two mainly fell into two categories – genes that were responsible for behavior traits (i.e. how we got from the temperament of a wolf to a golden retriever) and starch digestion. Yep, you read that correctly – one of the major genetic differences between dogs and wolves is that dogs have evolved to better be able to digest starches (carbohydrates) than wolves!

As for the carnivore vs omnivore controversy, dogs are classified in the Order Carnivora, but other species included in that group include omnivores such as bears, raccoons, and skunks as well as the giant panda, which is a strict herbivore. From a biological perspective, dogs lack most of the metabolic adaptions to a strict diet of animal flesh that are seen in true carnivores such as cats or ferrets. Compared to true carnivores, dogs produce more of the enzymes needed for starch digestion, have much lower protein and amino acid requirements, and can easily utilize vitamin A and D from plant sources, just as people do. We also have evidence that they also evolved from wolves by eating more plant material. All of these factors make them more accurately classified as omnivores than carnivores. 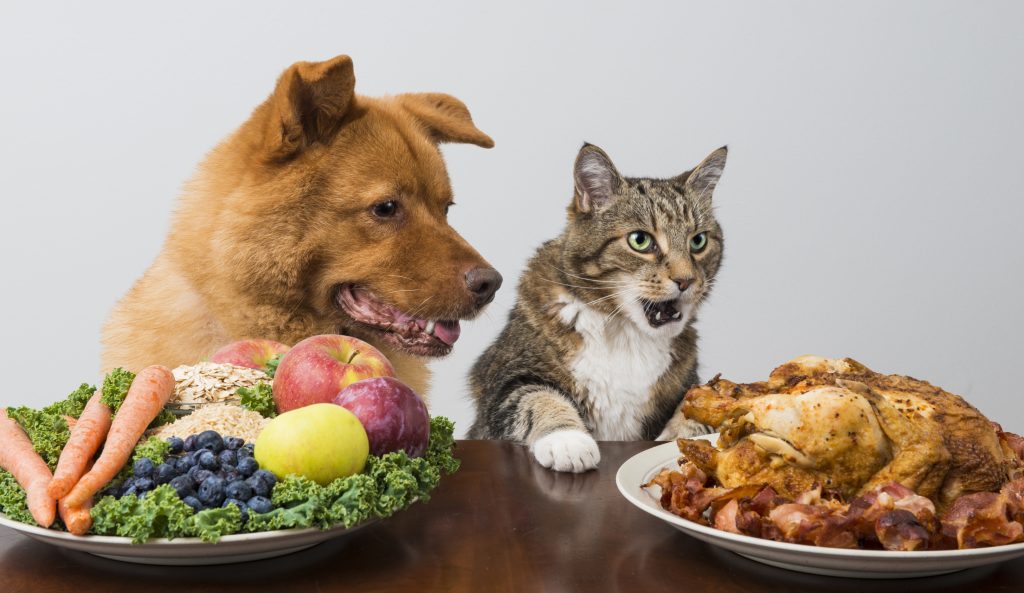 So, with all of that in mind, is a vegan diet safe for a dog?

Most dogs can do quite well on a carefully designed vegan diet that meets all of their nutritional needs.  As a veterinary nutritionist, I use meat-free diets quite a bit to help manage various health concerns. The challenge is that designing these diets is not the easiest thing to do. While a number of commercial vegan and vegetarian diets exist on the market for dogs, not all of them are equivalent in quality. In general, diets that include eggs or dairy as protein sources are less worrisome than diets based only on plant proteins. Home-prepared diets always fare worse as the vast majority of home-cooked meat-based diets dog owners are feeding lack essential nutrients and the vegetarian and vegan ones typically have all the same deficiencies and then some additional ones, such as protein.

Dog owners who insist on feeding a vegetarian and especially a vegan diet should seek out an experienced veterinary nutritionist to discuss their dog’s needs and develop a diet plan that minimizes health risks.

In summary, the diet the dog in the picture that started all the hoopla is being fed is definitely NOT meeting her nutrient needs, but that is for more reasons than just because it does not contain animal products. And the people criticizing the owner for their choices are basing their assertions on faulty information.