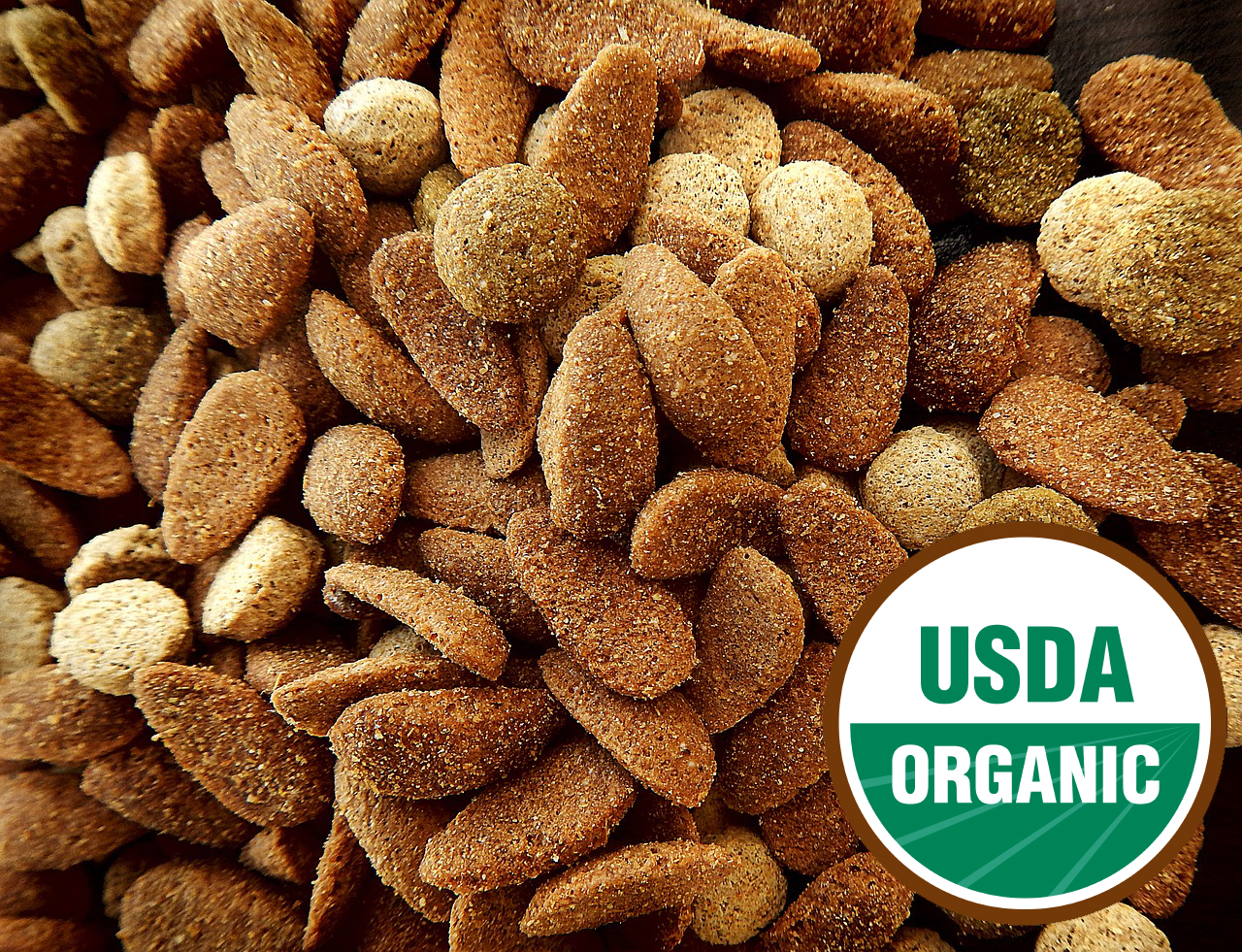 Are you an organic aficionado, or do you buy whatever foods appear to be the best value for your family? If you’re choosing organic, you’re definitely not alone – in a 2016 survey, 68% of Americans reported purchasing organic foods within the previous month. These choices are not without a cost. Perceived as being healthier alternatives to conventionally farmed foods, organics are often significantly more expensive – according to Consumer Reports, organic foods are on average almost 50% more expensive than conventional foods!

What about for pets? Compared to human foods, there are relatively few organic pet food options – any given retailer may only stock one or two brands. And like human foods, organic pet foods are considerably more expensive than traditional pet foods – an organic dry food typically costs more than double what a high quality non-organic pet food costs!  The obvious question is whether the added expense is an investment in good health for us, our pets, and the environment or whether we’re being taken for a ride.

Spoiler alert: the verdict is still out on the health benefits of organically grown foods versus conventionally-produced ones for humans and there really is no information for dogs or cats!

Let’s examine the evidence by answering some common questions:

While these all seem like good things, the differences between the nutrient levels in the foods were small and unlikely to result in any health benefits. Nutrient levels in food can vary widely based on season, soil type, temperature, growing method, and shipping/storage times so that organic piece of fruit doesn’t necessarily have more nutrients than the conventional one next to it even if on average organic varieties are higher in a specific nutrient. Moreover, if a diet is already meeting nutrient needs, more of a specific nutrient doesn’t necessarily make it better.  So, the bottom line is that there is little evidence of nutritional benefits of organic foods for humans.

This likely applies even more for pets as pet food is designed to be a “complete and balanced”, providing all essential nutrients at levels that meet or exceed recommended amounts. So, if less of a nutrient is coming from one food ingredient, quality manufacturers will ensure that it is made up for by another ingredient to ensure that the total nutrient amount meets the minimum guidelines.

Do organic foods use less pesticides?
Many consumers purchase organic foods to reduce pesticide exposure.  There is a common misconception that organic foods are grown without the use of pesticides. In fact, organic foods typically are treated with pesticides, but they are usually different pesticides than those allowed in conventional foods. Note that different doesn’t necessarily always mean safer – it just means that the pesticides cannot be synthetic and have to be certified for use in organic gardening.

The amount of pesticide residues – organic or not – on foods varies by the type of food and the country where it is grown. Some foods are low in pesticide residues regardless of how they are grown while other foods show a much bigger difference between organic and conventional. Various organizations (e.g. Consumer Reports, Environmental Working Group) have published information on average pesticide residues for various grains and produce, but interestingly enough these resources don’t always agree (look at spinach and cherries on both sites). It is also important to keep in mind that just because a food may be “higher risk” for pesticide residues doesn’t mean that it would cause health issues as part of a normal diet.

What about GMOs?
A final reason that many consumers cite for buying organic is to avoid GMOs (genetically modified organisms). It is true that GMO plants (only 10 plants are currently available as GMO-versions in the US) are not allowed to be sold as organic, even if they would otherwise meet the guidelines for organic. However, despite widespread consumer belief that GMOs should be avoided, there is actually no evidence that they are harmful to pet or human health (stay tuned for a future post on GMOs).

The bottom line on organic pet foods
So, with all this in mind, what is a concerned pet owner to do? Certainly, if you feel strongly about feeding an organic diet to your pet (commercial or home-cooked), your pet doesn’t have special needs that restrict the type of diet you can feed, and you can afford the price difference, do so. Just be sure to get your recipe from a board-certified veterinary nutritionist or research the company making the commercial food carefully to be sure you’re not sacrificing nutritional knowledge and quality control just to be feeding organic.

If, on the other hand, your pet needs a special diet or you can’t justify the expense or limited options, don’t worry that your pet is missing out on any health benefits.  Talk to your veterinarian about the optimal high quality diet for your pet with conventional ingredients. You can be confident that if you give your pet plenty of exercise and enrichment, regular veterinary care, keep them lean, and provide lots of love, you’re providing them with the best of care.